The best-selling luxury SUV is getting special treatment. We already got used to the F Sport version of the Lexus RX. Now it is also available with a performance package centered around an enhanced engine. But, that is not all. The 2023 Lexus RX TRD is the new version. Unfortunately, there is bad news – this aftermarket upgrade will be available only in Japan. If the RX lacks anything, that is an extreme off-road capability the rest of the Lexus and Toyota lineups is well-known for.

The 2023 Lexus RX TRD will bring unique upgrades that make the SUV meaner. The package is available for all engines, including the RX500h performance edition. The combination of those two packages will definitely make the SUV very attractive, outside, inside, and under the hood. We still hope that Lexus will offer the TRD package to its US buyers.

The new RX is already eye-catching. So, making it even more attractive was a tough task. But, Toyota Racing Development produced magic again. A new splitter is the highlight of the front fascia. The kit is totally new and lines are getting out of the bumper. The shape is not traditional, which makes the nose aggressive. Side skirts are bolder and you have an extension at the tail. It makes an impression of lowered suspension, but the system is the same as on other configurations.

The TRD package comes with 20-inch wheels. Optionally, you can upgrade to the 21-inch set. Diffuser housing was revisited. Now, the 2023 Lexus RX TRD comes with quad exhaust tips. The rear wing is also new. To round up the visual upgrades, the company will offer unique paints – white gunmetal and matte black. 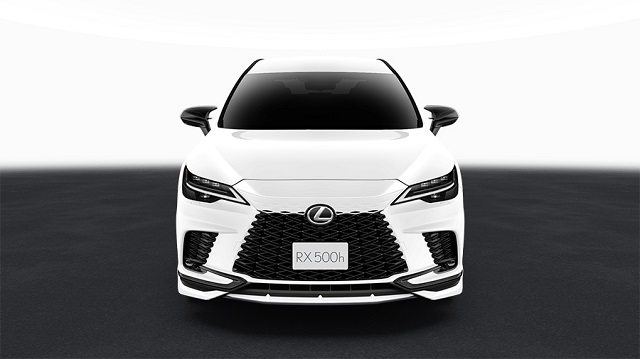 The TRD package is available all across the lineup. So, you can combine it with the RX 350, RX 450h, or even the RX 500h Performance model.

The old 3.5-liter V6 engine is finally replaced. Now, the SUV is getting power from a turbo-four system. A 2.4-liter engine manages to deliver 275 hp and send them to the front wheels. That is a slight downgrade compared to the previous version. The drivetrain also produces 217 lb-ft and sends them to the front wheels by default. Or, you can select AWD.

A hybrid variant deploys a 2.5-liter engine and enhances the outputs with an electric motor. It is not a plug-in system, so the RX doesn’t offer an electric range. This one brings better gas mileage with 36 mpg combined. The output of 246 hp is distributed to all wheels.

The 2023 Lexus RX TRD 500h will be the top of the range version with a high-output turbo-four plant and the Direct4 AWD system. This setup makes the SUV accelerate 0-60 mph in less than 6 seconds. The configuration produces 367 hp and 406 lb-ft. 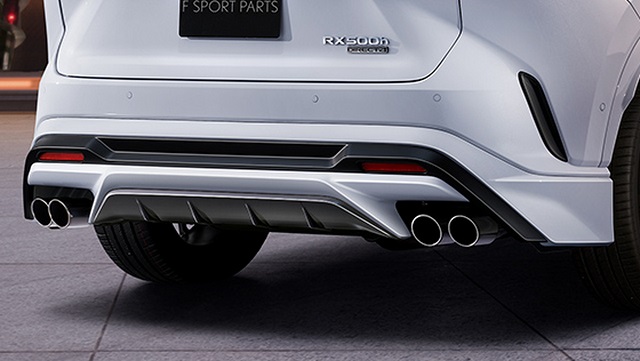 We hope that the company is not going to disappoint an army of fans in the largest market for luxury SUVs. RX is the best-seller in the class. The TRD is a special package that draws a lot of attention to every Toyota vehicle using it, such as the 4Runner. So, the 2023 Lexus RX TRD would cement the #1 place for this SUV, and make it one of the best US SUVs overall.