There are two variants of the 2023 Toyota Crown Hybrid available in the US market. The standard offer includes the Toyota Hybrid System, or THS, while the Crown Hybrid MAX delivers more power and torque. Anyway, it is reserved for the top of the line Platinum grade. Also, the car is not offering classic setups only with an internal combustion engine. So, the future is becoming brighter – sooner or later, all vehicles will be totally electrified.

The 2023 Toyota Crown Hybrid is still a new car. Being available only with hybrid drivetrains is both a good thing and a downside. There is still a lot of fans of standard systems, so they will pass on the Crown. And the car market is not as popular as before. More buyers are picking crossovers and SUVs, so Toyota can lose a lot if the remaining fans are turned away because of a hybrid engine.

On the other hand, the vehicle is more than efficient. Plus, the designers did a great job. The Crown is going to be recognizable thanks to the exterior styling. We can also praise the ease of hopping in and getting out of the vehicle. The interior is not too generous, especially at the back. But, this is not an SUV. Definitely, the vehicle is going to be interesting because its sales have just been launched and it delivers Toyota’s pedigree. 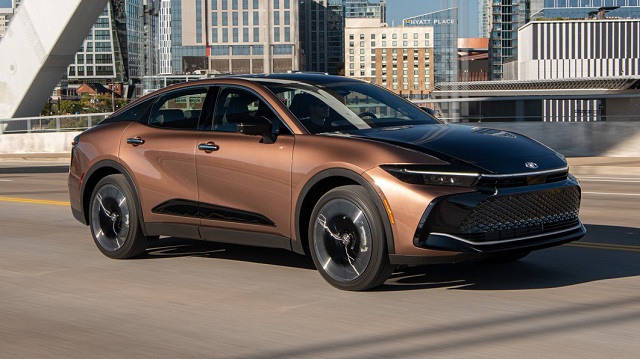 The 2023 Toyota Crown Hybrid THS is the entry-level configuration. The base motor is a 2.5-liter four-banger. Thanks to a hybrid support, it can deliver 236 horsepower and the gas mileage is 41 mpg. This is not a bad output for a car of Crown’s size. There are two batteries, mounted at each axle. This setup is available for the XLE and Limited grades.

If you want to build up the 2023 Toyota Crown Hybrid, then the MAX version is there. However, you can only pair it with the Platinum package, which is already the most expensive trim. A 2.4-liter turbo-four engine makes it even more attractive. Again, a couple of electric motors and AWD are there, and the outputs are 340 hp. The gas mileage is around 30 mpg. A plug-in hybrid is also possible. We can imagine the Prime system of the Rav4 on the Toyota Crown. But, the company needs to confirm it. 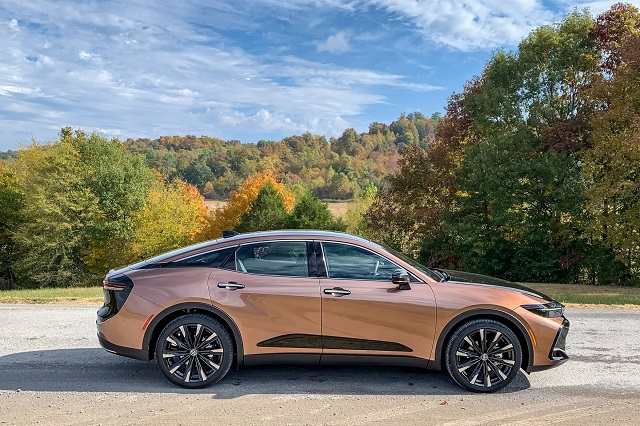 So, two engines and three trim levels are available for the 2023 Toyota Crown Hybrid. The THS comes for the XLE model, which is the entry-level grade. Highlights are 19-inch wheels, LED lamps, a heated front row, and dual-zone climate control. The center of the infotainment system is a 12-inch touchscreen. Wireless smartphone integration and charging are also standard. The car also comes with some advanced safety options, including blind-spot warning and adaptive cruise control.

Before you jump for the MAX configuration, the 2023 Toyota Crown Hybrid THS also offers the Limited grade. Two-tone alloy wheels are replacing the ones available for the XLE version. Then, the package upgrades headlights, adds a panoramic roof, leather seats, ventilated front row, premium JBL audio, and many more.

The main Platinum trim upgrade is the MAX drivetrain. Plus, there is a two-tone paintjob. A set of 21-inch wheels is also distinctive. Then, the power is handled better and transformed to a smoother ride thanks to the adaptive suspension system. Drivers will find the 360-degree camera and park assist pretty helpful. 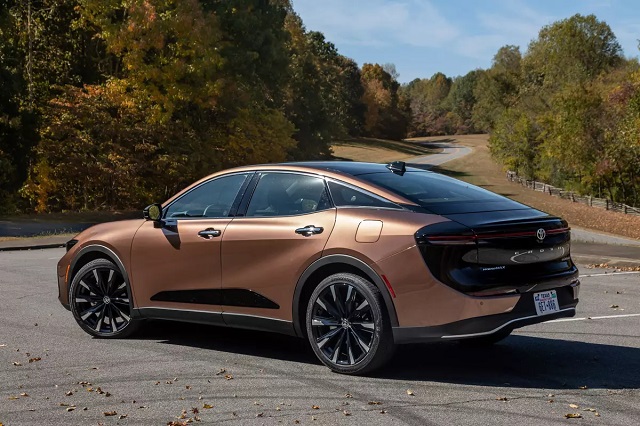 The new Toyota Crown has big shoes to fill. The 2023 YM is its first appearance. The car replaces Avalon, the vehicle that’s been in production for nearly 30 years. It won’t be so easy, but the company rarely fails in such situations. The initial model is very appealing, and we can expect further upgrades. One of them will probably be a PHEV system. The Crown will eventually become the EV. Plus, a couple of new trim levels are going to join the lineup for the following season.

There are no too many details available about the future of the 2023 Toyota Crown Hybrid. So, we stick to the existing versions. The XLE starts from $41,000, the Limited adds $6,000 and the Platinum is the most expensive, mostly thanks to the MAX configuration. Its price will be around $54,000.